A guest feature by Maggie Blackbird.

When it comes to writing, music is my biggest inspiration. I am a die-hard music fan right from the tender age of four when my father bought my siblings and I our very first record. I even remember the name of it. Juke Box Jive. LOL. Sure, it wasn’t hip, but who’s hip when they are four? I even brought the record to kindergarten for show and tell.

Each time I start a novel, I always have a playlist for the couple. I find the playlist keeps me in the zone while I’m doing dishes or exercising. But for some strange reason, I never created a playlist for Séamus and Shannon, the main couple for His Proposition. And I’m not sure why.

At least one of my main characters is always a die-hard music fan like me in each book I write. This time the person in question is Shannon Nadjiwon. I wanted to choose something a young woman wouldn’t normally listen to. For Shannon, she was all about Gordon Lightfoot, Neil Diamond, and Barry Manilow.

Music for the main character always leads me into researching the music. In a now defunct romance series that I started in the 90s, I had one female lead adore music from the sixties. So I naturally had to purchase tons of sixties music. I find listening to the same music that my main character enjoys introduces me to artists I wouldn’t have explored on my own. Take the Neil Diamond and Barry Manilow thing. I wouldn’t have purchased their songs freely, but once I did, I savoured every note and lyric like a box of Belgium chocolates.

Even listening to a song can inspire me to write a novel centred around it. My dad was not only a die-hard music fan, but also a musician, so music must be in my blood why I am so in love with it. And I don’t stick to my main genre of heavy metal and hard rock. I explore it all from 1950s doo-wap to country and western. Like right now, I am hooked on Waylon Jennings.

Imagine Séamus’ shock when he unearths Shannon passes on contemporary pop and hip-hop that most young women enjoy in this day and age, and prefers Gordon Lightfoot. I have my husband to thank for introducing me to this Canadian artist. He’s introduced me to a lot of music, even country.

So yes, it was strange Shannon and Séamus never got a playlist, let alone their own romance song LOL. I guess I’ll have to chalk it up to being super-busy and playing catch-up after a very crazy 2021 that left me unable to sit at the keyboard for a good six months since so much was going on within my extended family.

But for my next novel I have submitted to my publisher, they had a playlist and their own “song.” Yay!

His Proposition by Maggie Blackbird 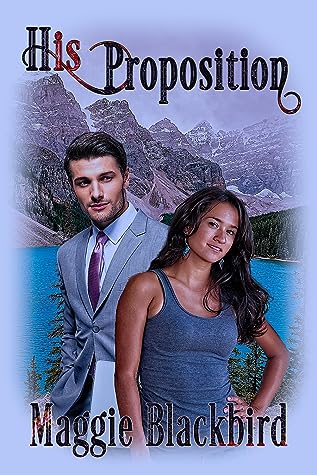 Her biggest dream’s offered on a platter, but the clincher is, she has to marry a perfect stranger.

When her employer offers the no-nonsense Shannon Nadjiwon the position of chauffeuring Séamus Daugherty, she jumps at the chance. To work for one of Toronto’s most powerful families means she can make her biggest dream of owning a fleet of limos come true, something her female relations tooling away at her Ojibway community want badly for her, and she won’t let them down.

His reckless need for speed cost Séamus Daugherty his license. If he doesn’t marry, as demanded by his overbearing father, he will not only lose his lucrative job with the family business —the only positive aspect in Séamus’ gilded cage life—but everything Daugherty.

The unpretentious and gorgeous Shannon will make the perfect bride, and Séamus is ready to strike a deal with her. One that will ensure he keeps everything he holds dear if she puts a wedding ring on her finger. However, they face three big obstacles: His family, her family, and a marriage neither truly wants, leaving both wondering if the sizzling sexual chemistry and cozy rapport they share is enough to grasp a happily ever after.

Shannon hit the turning signal and guided the Audi into the parking lot of the coffee shop. Speaking on a personal level was forbidden, one thing she’d learned from her boss the very morning when she’d started working for Elite Limousines. Although sociable clients existed, to engage in more than idle chitchat was a no-no.

Anything could upset a client, even favoring the wrong basketball team. Speaking about the area’s history, something she’d studied up on, was a safe conversation. “I understand your community was named for equestrian bridle paths in the early planning stages.”

“Yes, so I’ve heard. I must admit I haven’t really bothered to dig any deeper. I s’pose I should.”

Asking Séamus why was out of the question. Yet, it was rather strange he wouldn’t take an interest in the history of his neighborhood. She stopped at the drive-thru board so he could order.

Even a simple question coming from his mouth was a nibble to the lobe of Shannon’s ear and carried a hint of m’dear. Such sophistication. She flexed her thigh muscles, an automatic response to tense or uncomfortable situations. “Excuse me, sir?”

“Ah, ah, ah.” She glimpsed him waggling his index finger. His wide mouth formed into a teasing grin. His emerald-green eyes, what the grass of Ireland probably looked like, crinkled at the corners. “What did I say about formality?”

“Once again, what is your order, please?” The drive-thru attendant’s query came through the intercom.

“One moment. I’m in the middle of speaking to my driver.” Séamus’ tone was dismissive, as if used to making someone wait. He settled his delicious gaze back on her.

His discourtesy to the attendant rolled off Shannon. She’d heard the same dismissing tone from past clients. The annoyed hiss coming from the intercom didn’t escape her notice, though.

“You don’t need to keep repeating my name. Now, I asked you what you’d like.” Séamus reached into the breast pocket of his navy-blue designer suit that hugged his athletic body.

Which sport gave him such an attractive physique? When Shannon had arrived for work at eight this morning, she’d spied a swimming pool and tennis court on the grounds. “A medium double-double is fine. And thank you.”

“Not a problem.” Séamus waved his hand in a casual manner. He leaned on the console and spoke at the lowered window. Once he’d ordered, he settled his delicious gaze naughtier than a schoolboy back on her.

Teeth clacking, Shannon pulled up past the drive-thru window so Séamus could pay for their coffees. Her phone was off, but wait until she got home after work and told her friends she’d be moving into the guest house for the duration of her job. For sure she’d receive a more than raving reference from Padraig Harrington the fourth. Her biggest dream was at her fingertips. Mom and Kokum would squeal.

An Ojibway from Northwestern Ontario, Maggie resides in the country with her husband and their fur babies, two beautiful Alaskan Malamutes. When she’s not writing, she can be found pulling weeds in the flower beds, mowing the huge lawn, walking the Mals deep in the bush, teeing up a ball at the golf course, fishing in the boat for walleye, or sitting on the deck at her sister’s house, making more wonderful memories with the people she loves most.