B.K. Bass is a prolific storyteller, a professional editor, and a worldbuilding aficionado. For the last few years, his blog has been a go-to reference when I need to set my head straight on speculative fiction genres.

As far as I’m concerned, this guy knows his shit, and I’m very excited to have him here today to talk about the mechanics of combining genres.

The Genre Blender with B.K. Bass

When you think of genre fiction, what comes to mind? Likely, you may think of fantasy tales with swords and dragons, science fiction with aliens and starships, or a horror yarn with some unknown threat lurking in the shadows. Something even more specific may come to mind, like the grand scale of epic fantasy or the sociological analysis of social science fiction. Perhaps it’s something more personal, like the emotional tug of a romance novel or the intellectual challenge of a detective novel.

Many modern authors have a tenuous relationship with genre, and there are various views on the subject. Some feel genre defines their work, while others see it as a shortcut to describing it. “I am a fantasy author” is a statement that may only hint at the scope of an author’s work or be rigid guideposts defining the boundaries of it. There are authors who shun genres entirely, considering them unnatural labels that limit the freedom of their art form. Others see them as useful tools to shape a story with familiar elements that will appeal to an established fanbase.

There’s no right or wrong approach here, but there’s a few matters of fact that every author should consider. First is that almost no matter where you look, books are categorized by genre; be it categories on a website or shelves in a bookstore. Second is that many readers search for new books by genre. Once somebody gets hooked on epic fantasy, they’re likely to seek more of the same. If somebody has a craving for a murder mystery, they’re going to search the mystery category or shelf. No matter how the author feels about labels and genres, they are an important part of the journey of books into the hands of interested readers.

But they can be more than that.

Figuring out how to mash up different storytelling conventions could be the spark that leads to something completely innovative.

Genre is a toolbox packed with an assortment of devices that an author can assemble into a story that appeals to readers who are familiar with or interested in such devices. Medieval-inspired fantasy kingdoms complete with dragons and wizards remain a popular schtick, and you must unpack that traditional fantasy toolbox to get what you need to put that kind of story together.

But there is something that I feel is even more useful about genre, and that is finding ways to mix them.

There are many aspects of storytelling that define genres, and each genre has its own set of devices within that definition. While some genres are familiar due to the type of settings they occur in, others are recognizable by the types of characters, the tone of the book, the structure of the plot, the themes they explore, or even the style we write them in.

The empty space within each of these toolboxes is where things get interesting.

Let’s take two genres that are combined with relative frequency: fantasy and romance. On one hand, we have a genre almost entirely defined by the setting. Of course, there’s a lot of variation within fantasy fiction, but the fundamental aspect that defines it is a setting where elements of magic or the supernatural are genuine parts of the world. On the other hand, we can define romance almost entirely by how it approaches relationships between characters. So, here’s a splendid example where one genre fills one slot in the toolbox, while the other fills another. There’s no conflict between the two of them, and they fill in the gaps in each other’s repertoire.

But we can do even more with that. Of the “big three” aspects of fiction, this example only covers two of them. We still must contend with plot. Now, there are romance plotting conventions we could use, or fantasy plotting conventions like the hero’s journey. But what if we threw something else into the mix? What if there was a murder mystery happening in this setting that our characters had to contend with? Now we have a fantasy romance mystery. There’s a lot going on, but none of the genres are stepping on the other’s toes. It’s like putting together a puzzle: all the pieces fit together perfectly to create the bigger picture.

This is just one example of countless opportunities to mix things up. Those who love delving into genres, like myself, may find this as a springboard for inspiration. Figuring out how to mash up different storytelling conventions could be the spark that leads to something completely innovative. Others, who aren’t fond of labels, might find this to be an opportunity to break the molds and ensure a single definition of genre doesn’t encompass their work.

And you might also find that readers love this stuff.

I recently published the last book in my Night Trilogy. Night Shift, Night Life, and Night Shadow are books built around this sort of genre mash up, and some of the most encouraging feedback I’ve received on all three books has to do with how they smoothly combine two genres. 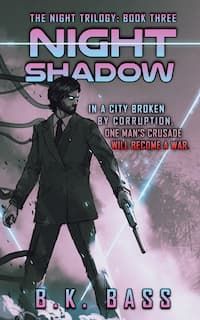 Now, I’m going to preface this by saying that this combination isn’t entirely new. It was inspired, in no small part, by the film Blade Runner and the Philip K. Dick novel that inspired it: Do Androids Dream of Electric Sheep? However, I endeavored to peel back the layers of those works to find what lay beneath the surface, and then pulled as well from those deeper and older inspirations to make the Night Trilogy what it became.

That out of the way, what is the Night Trilogy? It is a cyberpunk setting combined with a hardboiled detective mystery, although it shakes things up more and more as it goes along (but to avoid spoilers, we won’t discuss that). And why do these genres work so well together?

Well, let’s look at what slots in the toolbox they fill. Like our fantasy example, cyberpunk deals with setting: a bleak future where technology rules our lives and capitalism controls the world. It also involves themes of socioeconomic disparity and humanity’s relationship with technology.

On the other hand, mysteries are more about the plot, as we discussed already. And the hardboiled detective is a specific subgenre that takes this plot and adds in a gritty, often cynical, protagonist (that is a brief explanation that hardly does it justice) and dark, introspective tone. So, each genre is checking off different boxes: setting and theme on one hand; with plot, character, and tone on the other. I also pulled inspiration for the writing style from some older hardboiled stories, like the works of Raymond Chandler, to further flesh out the atmosphere.

And as I mentioned, the feedback has been overwhelmingly positive. Several reviews of the books have complimented how well these two genres work together.

Beyond this, the real fun can be picking apart different genres that don’t fit so seamlessly and make them work together. I’ve done several other mashups, including military science fiction with social science fiction and post-apocalyptic, flintlock fantasy with supernatural horror, and alternate history with cosmic horror. By removing or changing certain elements of genres to make them mesh, you may create something innovative and exciting. And this also casts a wider net to attract readers, as you won’t be just putting your book in one genre box, but several!

B.K. Bass is the author of over a dozen works of science fiction, fantasy, and horror inspired by the pulp fiction magazines of the early 20th century and classic speculative fiction. He is also a freelance editor with experience both as a publisher and editor-in-chief of a literary journal. When B.K. isn’t dreaming up new worlds to explore, he spends his time as a lifelong student of history, bookworm, and film buff.

Find out more about B.K. at his website and connect with him on Twitter. The Night Trilogy can be found via Amazon.